Raspberries may taste great in jellies, jams, and so many other foods that can satisfy a sweet tooth, but praising raspberries for their flavor alone is selling the little red berry short. Raspberries are loaded with vitamin C and numerous other nutrients that can help ensure a healthy mind and body.

Raspberries contain an unusually high amount of antioxidants (including vitamin A, vitamin C, and carotenes) that help purge the body of dangerous free radicals that can contribute to the growth of cancer. That fact alone should be sufficient reason to add a few portions of raspberry to the diet, but recent studies offer further incentive. Researchers have discovered the phytonutrients in raspberries may have the ability to intercept and change the signals sent by cancer cells. In the case of potentially cancerous cells the interception may suppress cancer growth. In the case of existing cancer cells the phytonutrients provided by the raspberries may cause the cells to commence a cycle of programmed cell death.

Raspberries are good for the eyes

Raspberries are also a good source of vitamin A, which is also important for healthy eyes and vision, and further eyesight improving benefits are offered by the presence of lutein—a pigment that helps filter the damaging rays of the sun. There is also a growing belief that lutein may possess the ability to interfere with the growth of cataracts

Modern day living can be hard on the skin. Smoke, UV rays, and the stress of hectic lifestyles can all be contributing factors to early ageing, but once again raspberries can rush to the rescue and prevent a body from looking old before its time.

The copious quantities of antioxidants in raspberries (50% more than strawberries provide) can protect the body’s cells and DNA from damage—including skin cells—and the little red berry’s manganese and Vitamin C content are useful for preventing tissue damage of all kinds.

The natural oils raspberries contain also offer protection from the ravaging rays of the sun and the vitamin E and omega 3 acids raspberry provides can help plump out the skin and give it a more youthful look. Unfortunately to appreciate the full benefits it is necessary to use the raspberries as the main ingredient in a facemask. Just pop a couple of cups of berries in a blender throw in a small pot of yoghurt and add a dash of olive oil. Blend until smooth, apply to the skin and wear it for about 20 minutes. And if the doorbell happens to ring? Probably best to ignore it.

Raspberries can help you Lose Weight

Raspberries contain an element called raspberry ketone. It is responsible for giving raspberries the fruity smell we all know and love. Raspberry ketone is also often used in weight loss supplements and is often praised as a “miracle fat burner”. It’s prowess in this field has never been adequately tested on human subjects, and many raspberry ketone detractors are quick to point this out, but several tests conducted on other mammals indicate the compound can produce a dramatic fat burning effects and a number of celebrities, including Kym Kardashian have admitted to using raspberry ketone products to keep themselves in tip-top shape. 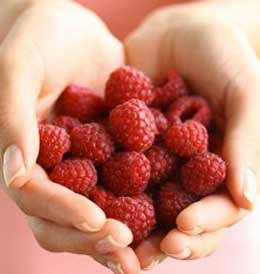 Raspberries are a high in fiber, so raspberry eaters should feel fuller for longer and are less likely to hunt out the biscuit barrel in the periods between meals. Raspberries are also a source of manganese, which can boost the metabolism and accelerate calorie burning.