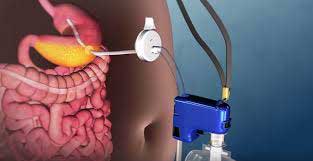 AspireAssist is a made by Aspirebariatrics in an attempt to tackle obesity. Obesity has become a serious problem on a worldwide scale and it is a problem that does not look like it will be going away any time soon. Many obese people are well aware of the strain their condition places on the body, and would like to do something about it, but don’t have the willpower necessary to modify their eating habits and make the problem go away.

Recently the FDA approved a new weight loss device that appears to have the potential to make losing weight a lot easier. Its called AspireAssist and the fact that it is designed assist people who aspire to lose weight could make the name seem very apt. However, the real reason behind the name may come as a shock to many people.

AspireAssist is a stomach tube designed to assist people who wish to aspirate (remove) their stomach contents, and the device has to be physically attached to the body on a long-term basis and the stomach tube enters the body through a small hole cut in the stomach. If you think it sounds pretty severe many people would probably agree, but the manufacturer, Aspire Bariatrics, make it sound like a walk in the park, stating the procedure is “non-surgical and reversible”. 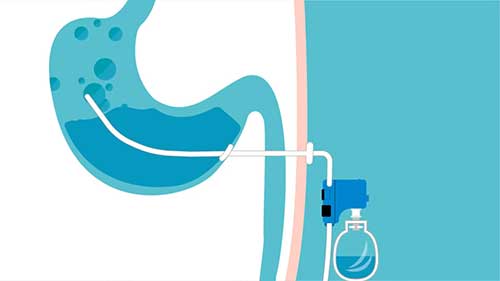 Although the procedure can be carried out on an outpatient basis, many people may argue that anything that involves cutting holes in the body is a surgical procedure. The claim about the process being reversible also raises a few questions because, although the Aspire website contains a wealth of information about the AspireAssist stomach tube and how it is installed, the site fails to state how it is removed or if there may be any dangers involved. In fact, and entry on the site’s FAQs page appears to be encouraging people to keep the device fitted for life:

“Our trials show that most patients who start this therapy elect to continue it to ensure that weight loss is maintained. However, if the AspireAssist is needed to maintain weight loss, it is likely weight regain will occur if therapy is stopped.”

Who the Device is for

AspireAssist is only intended for obese adults, with a BMI 35 to 55, who have failed to lose weight through diet and exercise or other less drastic measures. The device cannot be fitted without a doctor’s approval and people who wish to take this rather extreme route to weight loss are told they need to be “committed to making a complete lifestyle transformation”.

How the Device is Fitted and Used 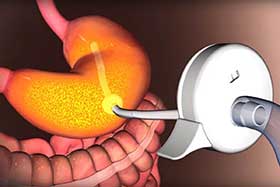 According to the Aspire website, the first step is to insert a thin tube into the stomach. This can apparently cause pain and discomfort that may last for a few days. The tube is left in place while the wound heals. Aspire compare this to the healing process that is required for a pierced ear. A week later a “discreet button” is attached.

People who decide to use AspireAssist to lose weight are also given a small hand-held device they can fit to the button shortly after a meal. It allows them to drain 30% of the food from their stomach down a tube and into the toilet. This takes around 20 to 30 minutes and could be a real passion killer for anyone who is out on a date.

How the Product Has Been Received

Although AspireAssist has only recently been approved for use in the US, the device has been been available in some European countries since 2011 and the media does not appear to have reported any calamities related to use of the device. However, some health experts have raised concerns about AspireAssist. In an interview with Fox News, Dr. Manny Alvarez said he had “significant doubts” about the product and worried it may irritate the stomach lining. He also hypothesised that using the AspireAssist may lead to dehydration and rob the vital organs of “vital electrolytes such as sodium, potassium, and calcium.” Taking a very bleak view of the possible consequences that could come to light in the future, he said, “I’m sure it won’t be long until tales of infections, leakage, lack of nutrient absorption, depression and suicide, severe hypoglycaemia, extreme thiamine deficiency, anaemia, osteoporosis, and all sorts of other complications surface.”

How the AspireAssist Compares to Other Weight Loss Options

Although there can be little doubt that draining food from the stomach will be an effective way to lower the calorie intake and this should, in turn, lead to weight loss. It could be argued the method does not compare well to other options including prescription medication, diet supplements, or even gastric band surgery.

Although gastric band surgery is more invasive and is known to carry dangers, the system works by restricting the size of the stomach to such an extent it is not possible to eat large amount of food because the stomach no longer has sufficient room. Although dieters who undergo the procedure will still be plagued by feeling of hunger they cannot satisfy, and will likely need to use a good appetite suppressant, this problem will be relatively short-lived. After a period of time the body will become used to receiving less food and will adapt accordingly. Then at a later date, when the gastric band is removed, eating less food will be normal and a healthy weight should be easy to maintain.

In a similar way, diet medications and commercially available weight loss supplements can also train the body to need less food. Dieters who are fitted with the AspireAssist are educated in healthy eating practices as part of the treatment, and this is good, but they may simply continue to (over) eat as normal and then drain some of their meal away. Although weight loss is still probable, if the AspireAssist stomach tube is removed the dieter will not have trained themselves to make do with smaller portions and the weight will likely return. The fact that Aspire appears keen to encourage people to keep the device in place, even when a healthy weight is attained, suggest they may have doubts about its ability to deliver long-term weight loss.