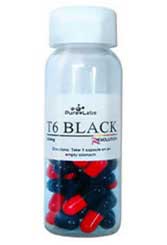 T6 Black Tube is a weight management supplement manufactured by Pure Labs. Very little is known about the company, but it maintains a mailing address in San Francisco and provides customer service via telephone, fax, and an online form on the company website.

Supplements that bear the letter “T” followed by a number, such as T6, used to be associated with the thyroid—a gland that produces hormones that are necessary for an efficient metabolism. These days the presence of a letter “T” on the label of a dietary supplement is often nothing more than a marketing ploy, as is the case here. T6 Black Tube does not contain any ingredients that are known to be capable of stimulating production of thyroid hormones.

According to the Pure Labs website, T6 Black Tube was created to be a new and improved version of a previous product, simply called T6 Black, which supposedly gave birth to “endless success stories”. We were unable to find any of these tales of triumph, but we did discover the old product and its predecessor share exactly the same formulation.

In our opinion PhenQ is better product with a multiple benefit.

How to Take T6 Black Tube – One capsule is required once or twice a day and should always be taken on an empty stomach.

No customer feedback is available for T6 Black Tube, but Pure Labs use Amazon to market another product, called T6 Black Revolution, and it contains the same ingredients in identical ratios. That being the case the two products should perform in a similar manner. Amazon customer reviews suggest the product may work for some users, but not for others. So although some people state it is “brilliant for weight loss” others claim the pills are “rubbish”.

Several customers report experiencing side effects and one reviews details a very worrying reaction that entailed a lack of energy, dizziness, and vomiting blood. The customer then states: “My concern is that such a dangerous product is freely commercialised without proper and legal review of those instantly possible side effects?”

No information is provided about the possible side effects or health considerations use of the product entails, but side effects appear to be an issue for some people so we advise all potential users to refrain from using T6 Black Tube diet pills unless they have attained the approval of their GP.

T6 Black Tube is sold without a money back guarantee.

Where To Buy T6 Black Tube

A 30-capsule “tube” of T6 Black Tube costs £14.99 from the Factory Supplements online store. It is not available from the manufacturer’s website, but the site does contain yet another rebranded version of the product, called T6 Black Revolution, that uses the exact same formulation to make the old formulation “even better”. Customers who hit the “Buy Now” button are transferred to the relevant sales page at the Factory supplements online store. Each bottle of T6 Black Revolution contains 90 capsules and has a price tag of £33.99.